How Microsoft is Changing Minds

From my collection of devices including iPads, iPods, iPhones, iMacs and MacBook Pros to my love affair with iOS development,

I consider myself a bit of an Apple purist—well, I used to.

Apple delivers tightly cohesive products that are beautiful, powerful and just work. Although the dedication to a fully integrated product model results in a limited product offering with few options for customization, historically, the products have been so ahead of their time in terms of aesthetic, power, and usability that they sell themselves. From operating systems that redefine human-computer interaction, to high-performance light weight laptops that are powerful and elegant, there is no doubt that Apple makes products that make the world better.

Critics complain that Apple products are closed and the operating system is too controlled. So, if you want open, Android is your platform. But have fun trying to maintain a unified experience in such a highly fragmented ecosystem! Not only is there hyper-differentiation in device capability and dimension – there are multiple OS versions co-existing in the same space. The up-side is that millions of people have access to information because of low-cost Android devices; the down-side is that app development becomes a juggling act between concessions to consistency and feature reduction to the lowest common denominator. Is anyone really surprised when the company that thrives on complexity is plagued with exponential fragmentation?

In the mobile sphere Apple and Google have defined how we interact with our devices and what we can do. From grids of app icon tiles that you slide from page to page, to push notification services, to purchase paths for music, movies and apps – the paradigms are in place. For the past few years there has been cross-pollination across platforms and only incremental improvements to each. Where are the moonshots?

If you want forward thinking innovation you totally think Microsoft, right? Well, if you’re like me, you would consider Microsoft only as an afterthought – like inviting your awkward Aunt Betty to the family reunion. It’s the right thing to do, but you know she’s going to put her happy dog on the dinner table and her casserole on the back porch. I mean, isn’t Microsoft boring? Microsoft is just for work. Microsoft Windows is what’s running on all of those horrible black tower PCs from the 90s with their out-of-date clunky displays. Microsoft is outdated. Microsoft is not cutting edge.

Well, that’s what I used to think.

Enter Windows 8. My first exposure to Windows 8 was on a Surface. Wow. Where are the pages of static uniform tiles that I’ve grown to associate with mobile operating systems? In truth, I was blown away because it was Microsoft that was presenting this unique OS that actually takes advantage of touch screen gesturing. It’s NOT just an incremental edit to an established convention. It’s a whole new take! I went back to my iPad and felt a little disappointed. Having multiple apps open at the same time is not the same as being able to actively interact with multiple apps at the same time. Why can’t I write an email and watch a movie on Netflix at once?

A kickstand. A back-lit keyboard that’s also a cover. A satisfying magnetic connection where the keyboard locks in to the tablet. Ports. More of a laptop than tablet in function; more of a tablet than laptop in form. The best of both worlds? I’d argue yes. If you don’t know what I’m talking about yet… here’s a hint: it’s NOT the new iOS or Android device.

It’s the Surface. In particular, the Surface 2 Pro. This device proves tablets can be for productivity AND recreation.

Last year, while Apple released an operating system whose icons were the focus of industry conversation, Microsoft took on two giants and, in my mind, won the battle. It delivered one of the most compelling products and provides a framework that enforces consistency while allowing external manufacturers to contribute to product development.

The strength of the ecosystem is that Microsoft is providing a platform for life: work and play.

Microsoft innovated and the world is better because of it. Last year there was no compelling reason to upgrade my MacBook Pro, iPhone, iMac, or iPad. Last year, the new device I had to have wasn’t an Apple product (for the first time in years), it was a Microsoft product. I had to have a Surface 2 Pro.

Microsoft is doing something right. This Apple fanatic is changing her mind.

In this
10 page
whitepaper, you will learn about:
Apply the Right People, Processes and Partners
Develop the Appropriate Metrics to Gauge Success
Choose the Right Cloud Service Provider
Download now 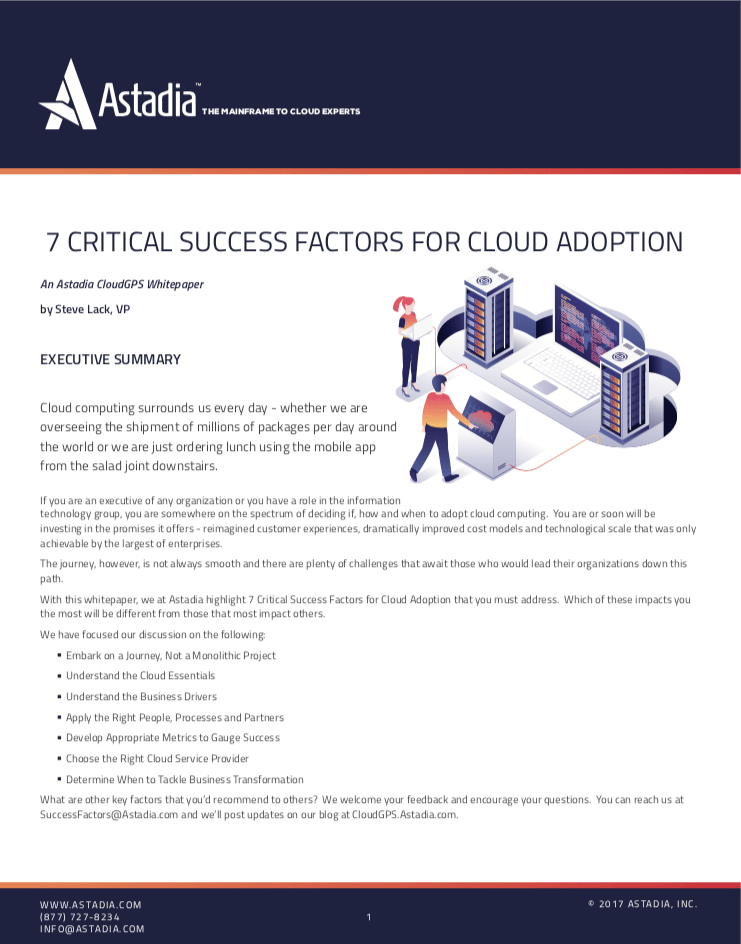 Executives and Security. It's Not Personal.

Six Reasons to Move Your Contact Center to the Cloud