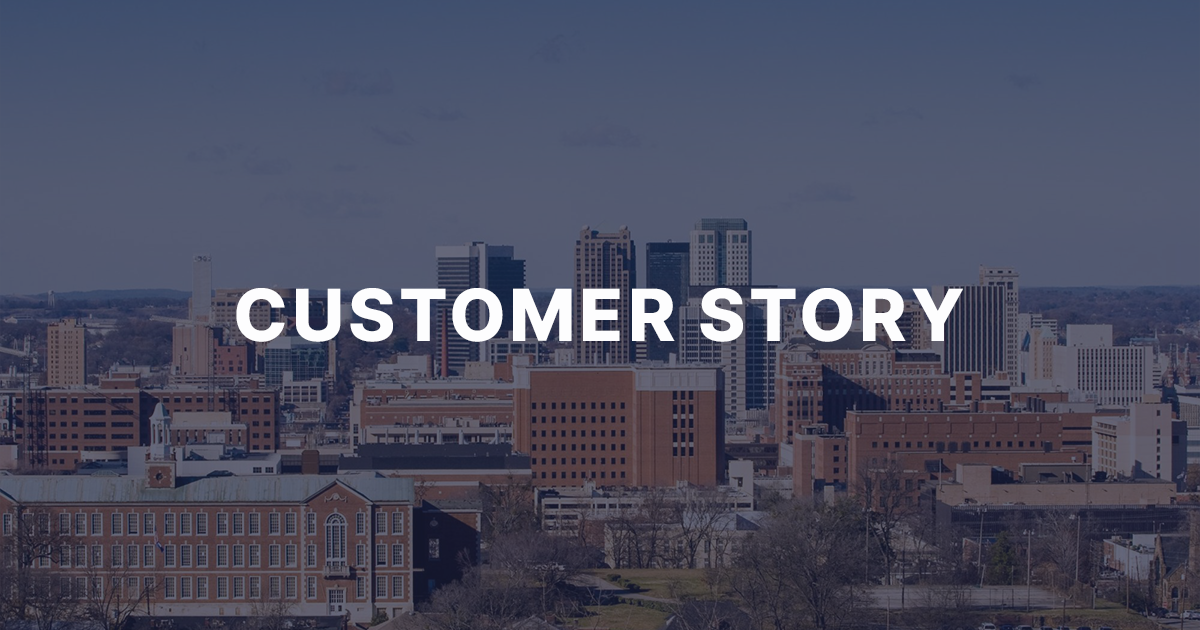 Earlier this year, Astadia was proud to be a part of the first-ever migration of a IT systems for a county government to Azure.  The mere fact that this was a “first ever” project is noteworthy; but that only begins to tell the full story.

As a result of the project, Jefferson County will save over $500,000 per year in operating costs alone. Additional cost savings have been achieved by eliminating legacy software licensing costs and replacing end-of-life hardware.

Moreover, the project was completed 10 months ahead of schedule, enabling Jefferson County to achieve nearly a year of additional cost reduction benefits.

To make matters even more challenging, the onset of the COVID-19 crisis occurred in the middle of the implementation process; requiring the county’s leaders to divert IT resources to accommodate the crisis.

For state and local government leaders, the Jefferson County project provides a prime example of how to do things right. Astadia, Microsoft, and our partner Micro Focus all played key roles; but the transformation really began when Jefferson County leaders set out to redefine the way they do business.

Chief Information Office Sri Karra approached county leaders with a proposal to develop a strategic plan based on stakeholder input and a thorough assessment of the status quo. CEO and County Manager Tony Petelos was an early supporter of this approach. With his sponsorship, Karra embarked on a project to define a strategic vision for the county’s IT Services department (ITS).

The result was a 54 page Enterprise IT Strategic Plan published by Petelos and Karra, outlining the county’s three-year roadmap for modernizing their systems and building a foundation for digital transformation in Jefferson County. Surveys indicated that Jefferson County ITS was already delivering high levels of customer satisfaction among internal and citizens.  Their goal, however, was to elevate ITS from its position as a “trusted operator” to an even higher level of maturity, enabling agility and innovation in county government.

Calling in the Experts

Prior to the mainframe modernization project, Jefferson County was dealing with significant complexity; running 28 legacy applications over 11 databases, including a sewer billing application that serves as the backbone for the county’s single largest source of revenue.

Faced with mainframe systems that were over 30 years old, county leaders set out to identify a strategic partner who could work with them to deliver successful results. CIO Sri Karra noted that with their deep experience in mainframe modernization projects, Astadia had the right competencies to do the job, along with a stellar track record. Having completed over 200 mainframe projects, Astadia brought world-class project management skills to bear.

For Jefferson County, it was becoming harder to hire people with the necessary skills to maintain their legacy systems. The county’s aging Unisys mainframe had become a very costly liability which made it difficult to adapt and innovate. Astadia brought with them a set of proprietary tools and methodologies for Unisys migrations; providing county leaders with a high level of confidence that the project could be completed thoroughly and efficiently.

Jefferson County chose to migrate to Microsoft Azure because of its scalability and superior performance in the Platform-as-a-Service (PaaS) category. In addition, the selection team appreciated Azure’s unparalleled security, especially with respect to virtual machines (VM) and Azure SQL Managed Servers.

The project team also leveraged Visual COBOL and other tools from Micro Focus, expanding the features and capabilities available to Jefferson County’s development team. By moving to a modern integrated development environment (IDE), the county has positioned itself to attract and deploy talent from a larger pool of qualified resources than ever before.

Constrained by contractual obligations and motivated to achieve ongoing cost savings as early as possible, county leaders set an ambitious timeline for the project. With the project proceeding ahead of schedule, they established a hard cutoff date for shutting down their legacy Unisys mainframe. This created a “do or die” situation for Astadia and Jefferson County ITS.

In the midst of the coronavirus pandemic, Astadia and Jefferson County ITS worked together to deliver the finished project ahead of the cutoff date. When all was said and done, the 24 month project was delivered in just 14 months.

Jefferson County’s successful mainframe modernization project has received considerable press within Alabama; and local leaders are celebrating it as the powerful example of how government can modernize, innovate, and better serve the needs of its citizens.

The end result was well worth celebrating:

Astadia is proud to have played a key role in this project, and pleased to work alongside a team of top performers at Jefferson County.

If you have a vision for transforming your state or local government IT systems, we would love to talk with you. Contact us today to discuss your project. 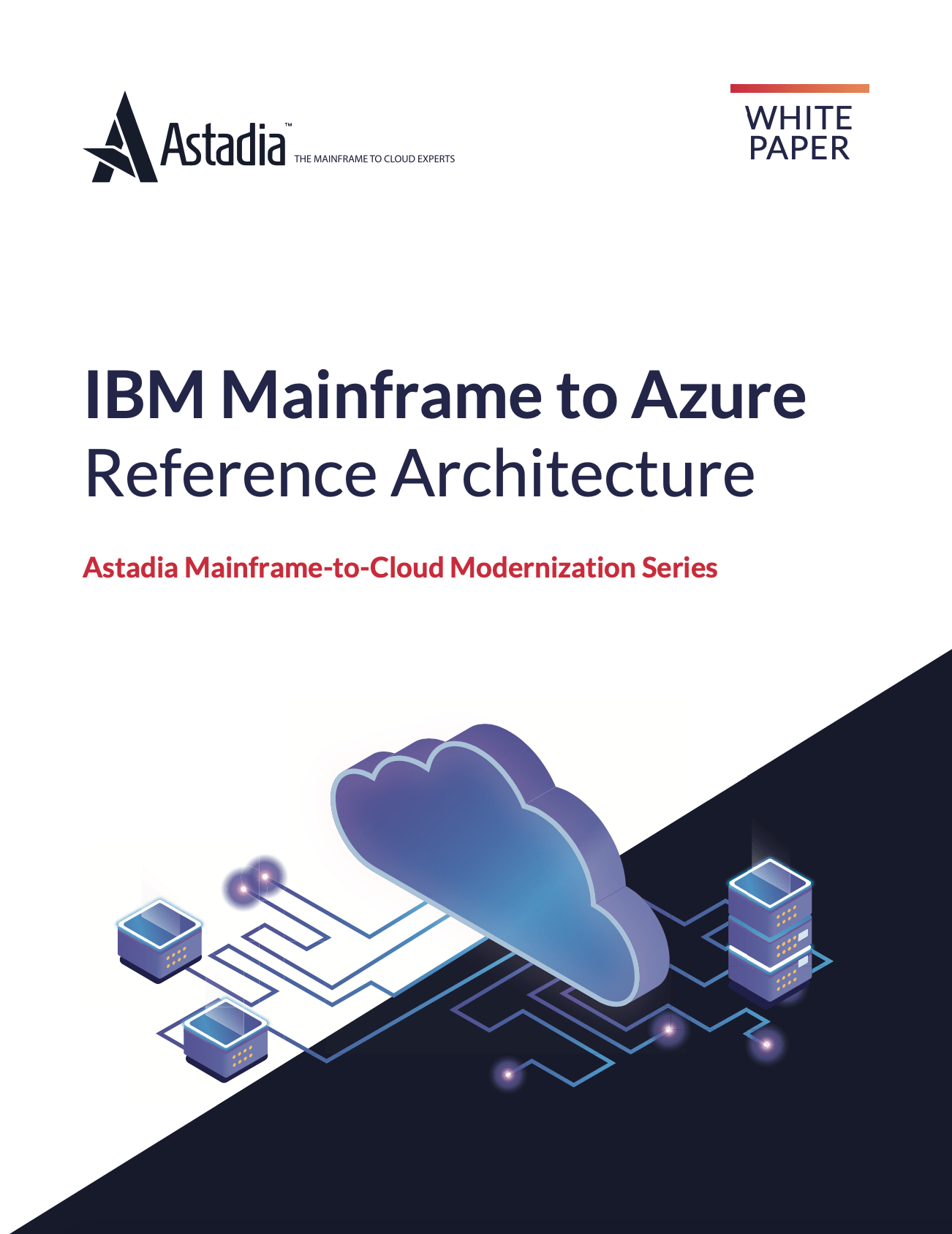 In this
10 page
whitepaper, you will learn about:
Mainframe monthly licensing charges can eat up 30 percent of your IT mainframe operating budget.
Depending on your modernization approach, your organization can reduce IT costs by up to 90 percent.
Organizations have lost 23 percent of their mainframe workforce.
Download now 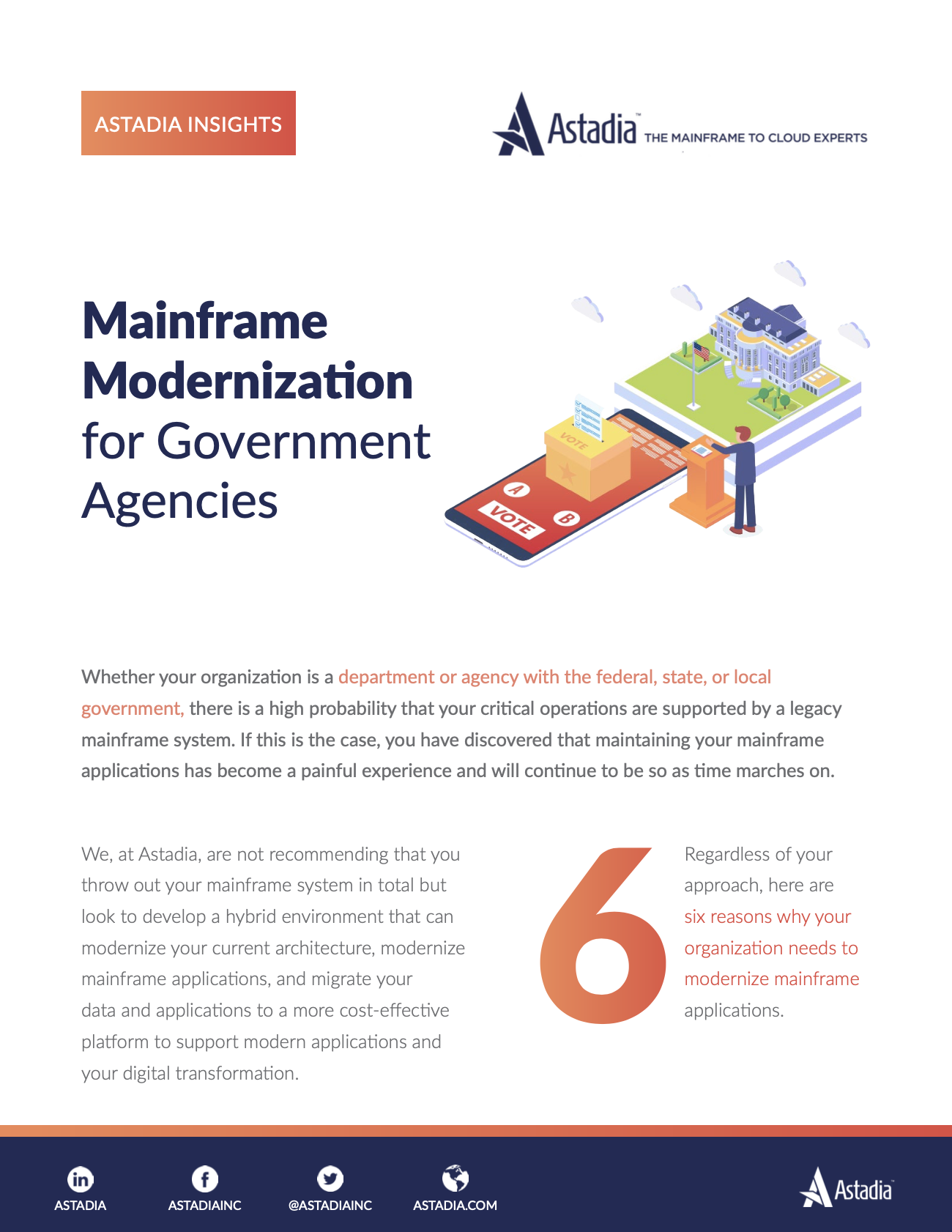 COBOL Containers on the Horizon

One Size Does Not Fit All: Why you Need the 5Rs of Mainframe Modernization