For the longest time, Legacy Applications with a substantial portion of business logic written in Assembler (IBM z/OS, z/VSE or BS2000/OSD) were sentenced to eternal life on the legacy platform. The main points preventing their migration to Open Systems:

With the development of the CodeTurn Assembler Migration tools finally a viable option is provided for this type of applications.

How does it work?

Usually, CodeTurn's Assembler transformation operates on the application source code, as that is where the real business logic can be found. For the Assembler to Java or C# migration this is slightly different as this starts exclusively from the expanded Assembler compilation listings – as can be generated with the assembler on the mainframe. This chosen approach avoids the need to emulate both the Assembler Directive and Macro (directive) behavior at runtime on the target platform, and allows an elegant conversion of the Assembler source code.

Any negative impact the expansion of the User Macro’s might have on the readability of the migrated source code, is mitigated by the migration tool.

The migration solution covers each of the following elements of a mainframe's Assembler applications:

Every mainframe assembly program is converted to a corresponding C# program or Java program.

Additionally, the Assembler conversion tool generates all the files that are required to maintain and build the converted code with standard tools in the chosen environment.

The generated C# or Java code can be parametrized on multiple levels to optimally blend in with customer standards in these technologies:

Integration with other technologies

Typically, the Assembler logic is only one part of the complete customer legacy data code. Astadia has developed mainframe migration solutions to C# or Java for the most commonly used technologies, and the migrated Assembler code seamlessly integrates with them.

For this reason, Astadia has developed two products specifically designed to reduce the time and effort spent in testing:

Both tools help in greatly reducing manual effort, by eliminating the need to write out test scenarios, and by enabling the autonomous replay of the recorded scenarios. They effectively limit the business-user involvement to just the acceptance testing.

Learn more about TestMatch and DataMatch.

Visit our Case Studies to see how we use automation to help organizations accelerate digital transformation. 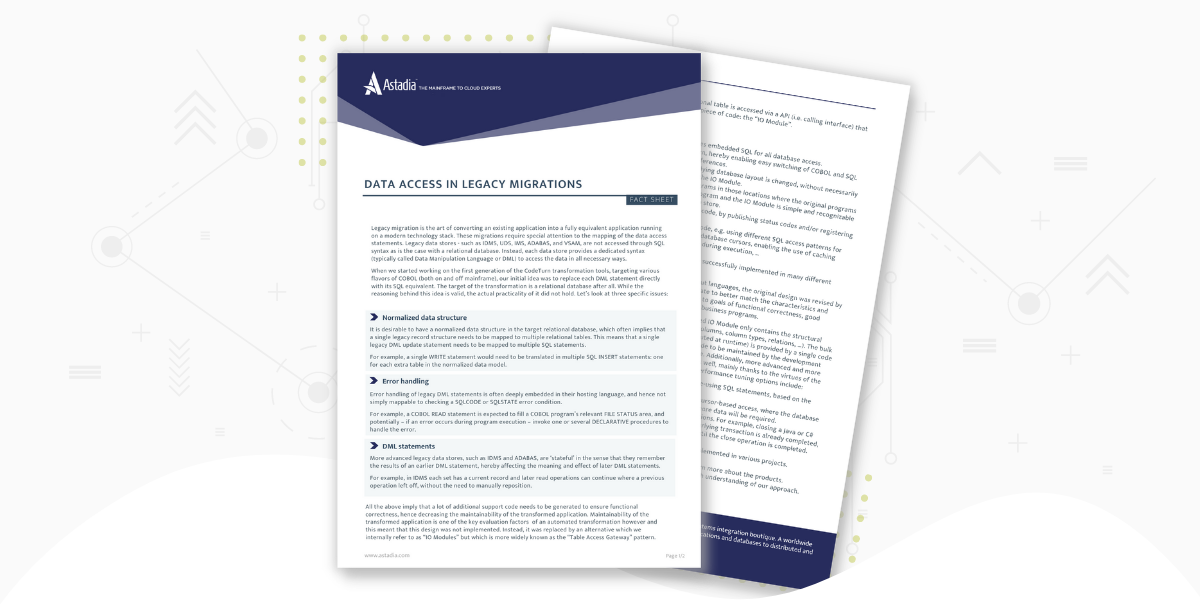